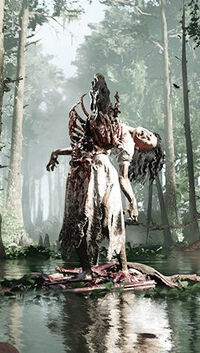 "Scognamillio thinks it feels like an evolution of a simpler form; in this case a person possessed by some kind of insect spirit eventually turning the body into a hive itself. Harold Black's book includes pieces of a hunter's describing this thing."

The Hive is a type of monster encounter in Hunt: Showdown. It has no particular resistances or vulnerabilities to weapon-specific damage.

Hives can usually be located near strategic points such as: resupply areas, areas with clues, big buildings, and boss areas.

Hives can attack Hunters by unleashing bees that cause poison damage. Otherwise Hives do not have any other attack method, but they can prove deadly due to their poison attack.

Hives can easily be killed by a well placed head shot.

Retrieved from "https://huntshowdown.fandom.com/wiki/The_Hive?oldid=963"
Community content is available under CC-BY-SA unless otherwise noted.