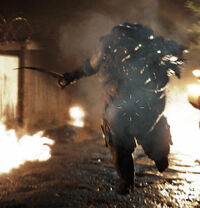 He calls them souls farmers, I think. Paxton’s journal has an entry about a thing simply called Meathead. It must be the same creature. Terrifying thing... A headless and massive, almost bloated, humanoid monster with leeches for hair. The stuff of nightmares.

Meatheads are a type of monster in Hunt: Showdown. Though they have no particular resistances to weapon-specific damage, they are vulnerable to rending and piercing attacks. It spawns leeches as sensors.

Meatheads are found rarely compared to other monsters. They can be located sometimes patrolling by large barns or large houses and they will never leave their spawn area unless attracted by a Hunter. Since Meatheads are blind and deaf, they will try to locate the Hunter by running to random locations. (currently they can sense hunters if poisoned by any source for the duration of that poison)

Once docile, they will walk in short distances, flinching themselves as leeches fall off him. Leeches act as sensors, helping a Meathead to react to a Hunter's presence.

Meatheads react by jogging to a random location in attempt to find the Hunter's location and attack them, dealing massive damage. Meatheads are extremely tough and cannot be put down easily and molotovs may not work at all.

Although fairly resistant to fire damage, one of the more easy and silent ways to get rid of a Meathead is to find at least three lanterns and throw them consecutively. Waiting until he stops burning after each throw. This will also deal with his leeches as they will be attracted by the sound of the lantern and die in the fire.

Retrieved from "https://huntshowdown.fandom.com/wiki/Meathead?oldid=1196"
Community content is available under CC-BY-SA unless otherwise noted.