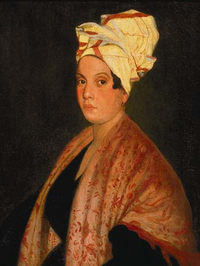 Marie Laveau was a real-life practitioner of voodoo and the occult in Louisiana, specifically New Orleans, in the early to mid-1800s.[1]

She is linked to Hunt: Showdown in a letter she penned to Dr. Jones, the head of the American Hunters Association. She may also be connected in some way to the unreleased Tarot cards.

You will have heard of me, so I will waste no time with introduction. I have learned certain facts about the American Hunter's Association of which you are Director, and so I will speak plainly. I have seen this city's end. It has already begun, and the corruption spreads. But we may yet avoid that end. I sense that you, too, have been into the shade. You hold great power, and yet you hide behind the mask of directorships and medicine. Cast off your mask, and let us act! Together. Yon sèl lang se janm ase.

Retrieved from "https://huntshowdown.fandom.com/wiki/Marie_Laveau?oldid=523"
Community content is available under CC-BY-SA unless otherwise noted.