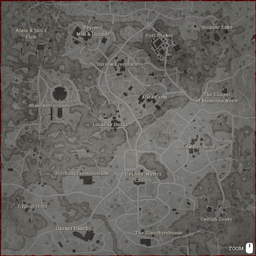 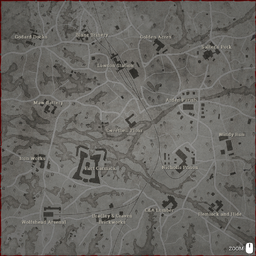 There are currently two maps in Hunt: Showdown - Stillwater Bayou and Lawson Delta.

Currently there are 5 times of day available in the game: foggy day, night, gold, neutral and sunset.

The players/teams spawn randomly into a match at a spawn point randomly chosen from a pool of possible locations.

Extraction is a place on the map where hunters can leave the area alive. Each time 3 extraction points spawn randomly from a pool of possible locations. Depending on the location either carriage or steam boat is used to transport hunters out of the map.

Compounds are groups of buildings. Each compound has it's name, after which an area is named. Inside each compound clues can be found that allows hunters to pinpoint location of the monster's lair. Those lairs are also located within one of the compounds. Within each compound supplies such as ammunition, med kits, traps etc can be found.

Resupply points are spots on map where large amount of ammunition boxes and med kits are located. On each map 4 to 5 resupply points are available from a pool of over 50 possible locations. They are marked on map by wagon icon.

A Clue is an anomaly found in the area where the beast resides. It resembles a pile of ash on the ground that smells of burnt flesh and sulfur. Hunters are able to track clues from a distance with the use of dark vision. When found, they can 'open' it to relive the events that left an imprint on reality, and by doing so, narrow down the location of the beast's lair. At least one clue is located in each compound on the map, but the exact location within the compound is randomly picked from the set of possible locations. In certain compounds two clues will spawn at the same time.

Map objects are entities in the world that can be interacted with: doors, lamps, ammunition boxes, explosive barrels etc.

Towers are shooting pulpits and scout towers located on both maps. Bottom of the towers are protected from most directions and contain ladder leading upstairs. Top floor has 2 small widows on the side with shutters, allowing hunter to break the line of sight, and also big window in the front. There is a box under each tower, on top of which medkits, ammunition, axe, hammer, bear traps and lanterns can spawn. In the tower itself there can also spawn a Medkit, Ammo Box, Special Ammo Box or a Weapon

Watchtowers are bigger elements in the World. You can go on top of them and there can spawn some supply items like: medkits, ammunition, Weapons or Lootable Items. You can also see over a far distance from them.