The Railway Tickets comprise the eighth and ninth sections of the Louisiana Incident book. The first page has two of them, while the second has only one. For purposes of completeness, the entirety of the tickets are transcribed, though some signatures are illegible.

GOOD FOR TRAVEL FOR TWO ALONG THE QUEEN AND CRESCENT ROUTE FROM CINCINNATI TO NEW ORLEANS AND FREE TRANSPORTATION OF 100 POUNDS OF BAGGAGE PER PERSON. THIS TICKET WILL NOT BE ACCEPTED FOR PASSAGE AFTER DATE CANCELED IN MARGIN HEREOF, AND IS WORTHLESS IF MORE THAN ONE DATE IS CANCELED.

Issued to: R. RAMSEY, A. LYNCH

Who signatures appear on the last page of this document. (note that there are faded signatures, seemingly in reverse, near each name.)

NOTICE TO TICKETHOLDER
Conductors WILL NOT ACCEPT this ticket unless all conditions are fully complied with, and that the contract MUST BE properly SIGNED IN INK by the person whose name appears on the ticket.

ONE WAY PASSAGE TO NEW ORLEANS

GOOD ONLY ON TRAINS SCHEDULED TO STOP AT POINTS IN BETWEEN THE ABOVE LOCATIONS WHEN STAMPED BY SELLING AGENT.

BAGGAGE TRANSPORT IS NOT INCLUDED IN THIS TICKET.

811914 (illegible signature; perhaps Henry with surname starting with "A") 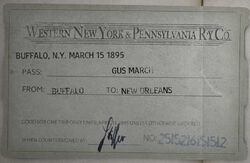 FROM: BUFFALO TO: NEW ORLEANS

GOOD FOR ONE TRIP ONLY UNTIL APRIL 15, 1895 UNLESS OTHERWISE ORDERED

WHEN COUNTERSIGNED BY: (illegible signature, appears to start with "L")

Retrieved from "https://huntshowdown.fandom.com/wiki/Louisiana_Incident_-_Railway_Tickets?oldid=756"
Community content is available under CC-BY-SA unless otherwise noted.