The newspaper clippings comprise the second section of the Louisiana Incident book. They are divided below into the locales identified in the handwriting on each clipping. 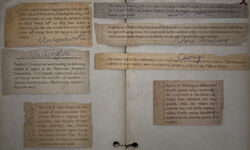 A queer game has been being played in Holyoke, MA, by the name of Mintonette, featuring knocking a ball back and forth over a net. Seeing the invention of the so called "basket ball" not four years before in Princeton, one can only wonder how many odd ball games will emerge from this region in the coming century.

President Cleveland was heard making the following remark in regard to the Venezuelan Boundary Controversy: "Gold beneath controversial soil does not always hasten the resolution of uncertain or disputed boundary-lines. Mysteriously, sometimes they even move."

The trial of John Selman for the murder of notorious outlaw John Wesley Hardin is ongoing. New testimony was brought forward today asserting that Selman committed multiple rapes during the Lincoln County War. We, at the Gazette, could not comment on the defendants clear guilt.

The first professional game of so-called 'American Football' was played here two weeks ago, between the Latrobe YMCA and Jeanette Athletic Club (Latrobe won 12-0). Could this be the birth of a new American past time?

A new bout of Yellow Fever has claimed the lives of 100 citizens over the last several months, and shows no sign of slowing down. This could mark the first outbreak in the city since the devastation of 1878, and is another sorry chapter for the history of a city which has already suffered.

The recent Labor Day celebrations were confirmed to be the largest in the country. This being the holidays first anniversary since its nationwide adoption, in light of the Pullman Strike.

Booker T. Washington delivered a notable speech today, announcing the compromise that blacks will receive basic education and due process, while the whites will continue their rule of the southern whites, thereby ending decades of agitation in the tiresome pursuit of equality.

Retrieved from "https://huntshowdown.fandom.com/wiki/Louisiana_Incident_-_Newspaper_Clippings?oldid=965"
Community content is available under CC-BY-SA unless otherwise noted.