The Governor Foster Article is the first page in the Louisiana Incident book. 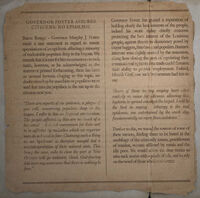 Baton Rouge - Governor Murphy J. Foster made a rare statement in regard to recent speculation of an epidemic affecting a minority of undesirable populace deep in the bayou. We remark that it is rare for him to comment on such tattle, however, as he acknowledged in the statement printed forthcoming, there has been an unusual hysteria clinging to this topic, no doubt stirred up by anarchists or populists out to seed fear into the populace in the run up to the election next year.

There are reports of an epidemic, a plague if you will, concerning populace deep in the bayou. I refer to this as flagrant speculation. The people affected by this are no doubt of a low creed. It is not uncommon for their sort to be afflicted by maladies which we superior men to not need to fear. Claiming such a thing as an 'epidemic' is therefore naught but a misinterpretation of their natural state. This being the case, calls to close the port of New Orleans will go unheard. Good, God-fearing folk have my assurance that there is nothing to fear.

Governor Foster has gained a reputation of holding dearly the best interest of the people, indeed his work today chiefly concerns protecting the best interest of the Louisiana people, against threats to democracy posed by carpet baggers, freedmen and populists. Business interests were rightly assured by the statement, citing how closing the port of regulating their constitutional rights to free trade could threaten their ability to provide employment. Henrik Graf, one such businessman, had this to say:

Some of those in my employ have cited malady as cause for idleness, allowing this hysteria to spread amongst the torpid. I will be the first in saying lethargy is the real epidemic, one entertained by the work shy, fundamentally no more than indolence.

Further to this, we traced the sources of some of these rumors, finding them to be based on the ramblings of the criminally insane, practitioners of voodoo, women afflicted by mania and the idle poor. We would advise the dear reader to take such stories with a pinch of salt, and to rely on the word of those who know better.

Retrieved from "https://huntshowdown.fandom.com/wiki/Louisiana_Incident_-_Governor_Foster_Article?oldid=999"
Community content is available under CC-BY-SA unless otherwise noted.