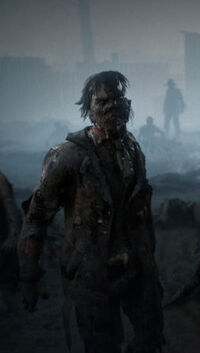 Grunts are a type of monster in Hunt: Showdown. They are resistant to weapons that deal blunt-type damage.

A randomly generated horde of grunts with visual and weapons variations roams the swamps and is attracted by sound.

Grunts are the most common type of creatures found in-game. They can be found anywhere the Hunters go and are nuisance when the area that Hunters need to go are patrolled by Grunts.

Sometimes, Grunts can be armed with weapons as well as molotovs, the latter being extremely dangerous and deadly foes for the Hunters to deal with as they can set Hunters on fire, depleting their health fast. Grunts with weapons can deal extra damage to Hunters.

Grunts can be killed rather quickly with a well placed shot on their head or with knives on their head. Shooting them on their body other than the head is not recommended as they cause little damage.

Once alerted to Hunters presence, they will jog quickly to catch up the Hunter and attack them.

Retrieved from "https://huntshowdown.fandom.com/wiki/Grunt?oldid=958"
Community content is available under CC-BY-SA unless otherwise noted.