There are currently 4 game modes in Hunt: Showdown - Bounty Hunt, Quickplay, Trials, and the Training Mode.

There may be up to 12 players in both Quickplay and Bounty Hunt Missions. Training Mode and Trials are strictly PvE with no option for co-op.

In this game mode, up to 12 players playing solo or in teams of two or three pit hunters they've recruited and geared up against one another to take on contracts for bosses. Each game may take place on one of Hunt's two maps and will feature either one or two contracts on The Butcher, The Assassin, The Spider, and/or Scrapbeak. To narrow their search for the boss, players must investigate clues, which can be found using darksight.

Each clue grays out a portion of the map where the boss is not, and upon collecting the third clue, the exact location of the boss is circled in red on the map. A clue will glow red when an enemy hunter is within 30 meters, and the center of the clue will be hollowed out if it has been taken by another player (clues are not exhausted/destroyed when they are discovered).

To collect a boss's bounty, players must kill and banish the boss. Anytime before the final blow has been dealt to the boss, going into darksight near its lair will activate 'quiet' or 'angry' whispers, and the relevant bounty token in the top left of the screen will flash white or red. Intense, angry whispers and a red-flashing bounty token indicate that an enemy hunter is nearby. This information is not available to hunters while the boss is being banished, leaving them vulnerable to attack from others vying for the bounty during this period.

When a player begins a banishment, all hunters are notified and the bounty token in the top left displays % completion of the banishment. In both duos and trios, a banished boss drops two bounties. Upon picking up a bounty, hunters are granted 5 seconds of enhanced dark sight, which indicates the vague location of nearby enemy hunters with orange streaks. All other hunters in the match can surmise the rough location of bounty carriers either in dark sight or on the map, indicated by lightning bolts.

Players who successfully extract--at one of the three random points along the edge of the map--with the bount(ies) are rewarded with Bounty Points, which are automatically converted into hunt dollars (a 1:1 conversion) and experience for both their Bloodline Rank and their hunter (a 1:4xp conversion). Players who die or otherwise fail to extract lose their hunter and his/her equipment and only gain half xp (though gun/tool/consumable unlock xp is unaffected) for their exploits.

Teams must stand within range of the extraction point for 30 seconds without any team member being downed to exit the mission. Players have 5 minutes to enter an extraction zone after all bounties have been extracted from a mission, or their hunter is lost.

In this game mode, up to 12 players compete solo in fast-paced battle royale-inspired gameplay to discover and defend the Wellspring against other hunters. Players cannot choose to play as any hunter from their roster in this game mode; instead, they are provided with a free hunter. Players choose the hunter's skin (within the hunter tiers (I-III) available to their bloodline level) and weapon type (pistol, shotgun, melee, random), each option providing a random weapon from a small pool of low-grade variants.

Players spawn scattered across the map, which is littered with consumables and weapons. To have a chance at victory, they scrounge for better gear as they progress toward the Wellspring.

The player's hunter is damned and must be saved by entering the Wellspring and remaining there until the time runs out. To narrow his search for it, he must activate four Rifts. When a hunter finds the wellspring, his location is broadcast to the remaining hunters on the map and in darksight. He must be killed before any other hunter can absorb the Wellspring's power. Only the hunter who draws the final second of power from the Wellspring can survive; all other hunters perish in flames. The player whose hunter survives may recruit him with all his gear, traits, and experience for free under the 'soul survivors' tab after the game.

The Training mode is an offline PvE mission. It can always be replayed, so it is a good way to test and optimize weapon and consumable use, but the rewards can only be acquired once. In the training mode, you can only travel between 6 compounds: Cyprus Huts, Davant Ranch, The Slaughterhouse, Healing Waters Church and Lockbay Docks. There are three difficulties available.

- All enemies, basic and advanced, in normal numbers
- A regular amount of ammunition supply and health stations
- A target (Butcher) with 100% health
- No weapons to loot near the Target's lair

Trials allow players to explore the maps without AI on them and complete challenges in the compounds.
In every trial you can earn three stars with which you can unlock different Rewards There are three different trials: Parkour, Sniper and Wave. 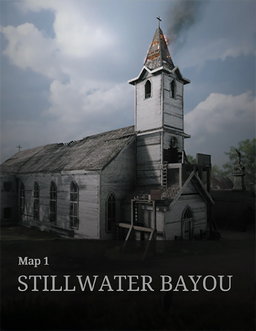 In parkour trials you need to collect checkpoints in a timeframe. On the way you need to survive attacks from AI.

You spawn in an elevated place and need to kill your targets, mostly with headshots, within a specific time.

In the Wave trial you need to Kill a specific AI and banish them while waves of other AI attacks you. You need complete it within a timeframe. 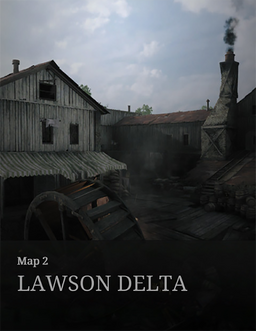