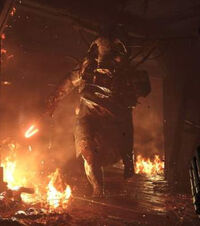 The butcher. A deformed animal head of some kind. I can see flesh and teeth and a tortured eye.

The Butcher is one of the boss monsters in Hunt: Showdown. Players need to take it down with shotguns and explosives. Large and resistant, it is immune to fire.

Retrieved from "https://huntshowdown.fandom.com/wiki/Butcher?oldid=987"
Community content is available under CC-BY-SA unless otherwise noted.