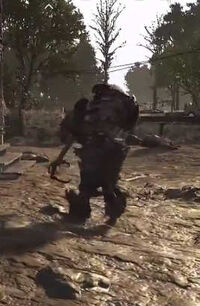 Armored is a type of monster in Hunt: Showdown. It is resistant to rending damage as well as bullets, though is vulnerable to fire. It is covered by protective armor that can be chipped off by attacks.

Armored monsters are commonly seen in jungles and inside the towns. They often move around at a very slow pace and in a short path. They are never seen crossing the whole map. Hunters can have difficulty passing an area patrolled by an Armored as they need a lot bullets and melee damage to be put down.

Lanterns or any form of fire can prove effective as a method to put down Armored quickly. An Armored on fire will quickly and violently react to the attacking Hunters for few seconds before dying.

Initially, Armored are slow moving creatures when they are unaware of nearby Hunters. However, they will react rather quickly and jog very fast to catch up the to the Hunters and attack them, potentially causing moderate to major damage. It is very difficult to escape from an Armored in close range and a melee attack is strongly recommended to fend off the attack.

Retrieved from "https://huntshowdown.fandom.com/wiki/Armored?oldid=964"
Community content is available under CC-BY-SA unless otherwise noted.